After 7 months of travelling I was excited but also apprehensive to reach a new continent and get to South America for the first time. I left Auckland and some lovely family and friends there and to be honest was pretty terrified of going to a new continent and to a place where I didn’t know anyone…oh and didn’t speak a word of Spanish (my anxious streak was in over drive!!).

I landed in Santiago on the 10th April, the capital of Chile and spent 3 days there staying in an Airbnb with a Chilean lady. I always think it’s funny arriving into a new country and being at the airport, when I arrived into Santiago airport I was approached by two men asking me where I was going and did I need a airport taxi, they kept flashing me security badges to reassure me that they worked there. It’s funny looking back on this now, they then wanted to help me with my luggage and when I said I was fine but just needed a cash machine, they took me over to one and proceeded to stand right behind me whilst I tried to get money out.

Yep…my nerves were now in overdrive, but after telling them to move away slightly from me as they were making me a little nervous, they did and finally took me over to a reputable shared taxi service who got me to my Airbnb apartment safely. I realised that this was just their way of trying to help me but it’s funny how we can take some friendliness as a threat. I think that sometimes travelling on your own means you constantly have to have your wits about you, which can be tiring.

I should also mention that after 7 months of travelling, I was getting pretty tired of hosteling! It wasn’t that I had had any real issues (except for some very loud snorers) but I was just finding it hard sharing a room and repeating to people  over and over again…. ‘where are you from?’ and ‘how long are you travelling for?’. I think this was totally normal after spending 7 months away from my home comforts and family and friends. So Airbnb was a nice change, nice for a few days and in a big city where there was lots to do! Unfortunately I ended up staying in an Airbnb with a even louder dog to contend with who was also the owners pride and job…oh the joys of travel (I am not a big dog person either).

I was also a bit nervous about travelling solo as a women in South America, you hear so many stories and even before I left New Zealand, people kept saying I was so ‘brave’ to travel alone to South America…..I certainly didn’t feel brave! I think New Zealand had given me a glance back to my life in the UK and I had fallen back into a kind of normality, so landing in Chile felt like me leaving the UK all over again.

Not to help matters, on my first day in Santiago, I witnessed a boy on a bike trying to steal a mobile phone out of someones hand who was right next to me on the pavement. This did nothing to calm my worries and made me feel a little anxious however it also made me think about how this happens all the time in London and that I just had to be sensible with my belongings.

Santiago itself is a very modern city and I enjoyed visiting Pablo Nerudas house (a famous Chilean poet and political figure). I also visited the contemporary art museum Museo de Arte Contemporáneo and went up to the Cerro San Cristobal which holds a statue of the Virgen de la Inmaculada Concepción (a staple for most South American cities).  I ended up spending 3 weeks in Chile and here are my highlights (Oh and after three weeks I was beginning to realise South America was no different to Asia in terms of travelling solo and as a women… and I was enjoying it and meeting loads of great people again.

Valparaíso (or ‘Valpo’ as it is known locally) –

This beautiful city on the west coast of Chile is a 2 hour bus ride from Santiago and is super cool. Built on rolling hills, its historic quarter has been declared a UNESCO World Heritage site. It is an amazing city, with colourful buildings, street art everywhere (some of the best in South America) and there are funicular lifts which take you up to different parts of the city due to the steep hills.

This has to now be one of my favourite cities in the world, it’s so beautiful and colourful especially due to the streets art filling every street corner! There are also loads of great architecture, shops, bars and restaurants as well, I loved exploring the cobbled streets of ‘Valpo’! I ended up doing a Street Art tour which was really interesting and took around 3 hours visiting different areas of the city and seeing different South America street artists. One of the most famous Chilean street artists I saw was Inti whose work can been seen all over Valparaíso. 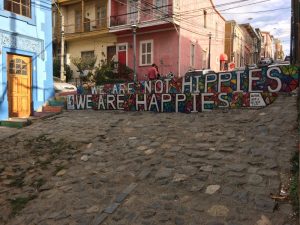 I also visited Pablo Neruda’s second home in Valparaiso which is really beautiful as he was a avid art collector from around the world, he also won the Nobel Prize in Literature in 1971. I ended up spending 5 nights here in two lovely hostels, it’s a very relaxing place, however there were two earthquakes whilst I was there which was a little scary! Chile is on the “Pacific Ring of Fire” and has a long history of deadly quakes.

This was also were I sampled and made my first ‘Pisco sour’ which I fell in love with straight away and couldn’t stop drinking in Peru as well! The Chileans are extremely proud of the Pisco Sour and my hostel host ended up holding a tasting and making session which was fun. Although I ended up with an extremely bad hangover after doing some Pisco shots and then ended up in a bar with a Rolling Stones tribute band playing! It is hotly contested in Peru and Chile as to who ‘invented’ the Pisco Sour…both claiming it was in them.

Views of ‘Valpo’ with famous Chilean street artist Inti’s famous muriel on the side of buildings. 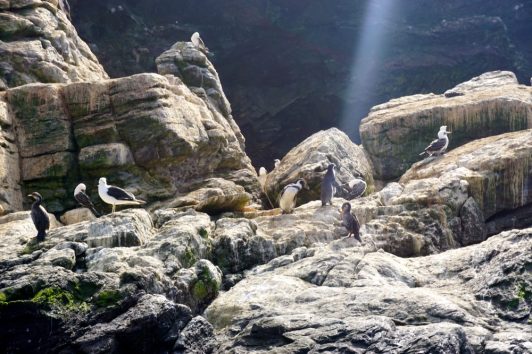 From Valparaíso I got the day bus to La Serena (taking about 5- 6 hours) up the coast and spent 5 nights here. I stayed in a lovely hostel called Hostel El Punto which was really very organised and the staff were so helpful at arranging day trips, I also met some amazing people here. From here I did a few days trips as it was a great starting point to the Elqui Valley and some beautiful islands off the coast.

I did a day trip to Punta de Choros a fishing village about 100km north of La Serena from here you can visit the Humboldt National Park and visit several islands off the coast. We had a great day going out on fishing boats where we visited several islands (you are not allowed to get off the boats as it’s protected) but from the boats we saw the Humboldt penguins in their natural habitat and plenty of sea lions. We then got dropped off on Isla Damas which is the only island in this national park which you can walk around on and visit for about an hour.

I also did a day trip to the beautiful Elqui Valley famous for its amazing scenery and gorgeous weather. It is also famous for its Pisco production and for the tasty ‘Pisco Sour’ drink. It was stunning and we visited several villages on the trip such as the lovely Pisco Elqui and Vicuña villages, this area is also famous as the birthplace of Chilean poetess Gabriela Mistral. 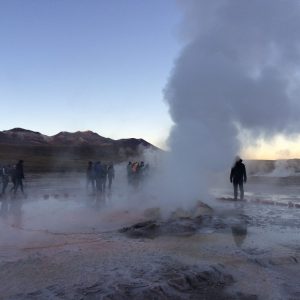 From La Serena I got a 17 hour night bus to San Pedro a town in the Atacama Desert. I haven’t talked too much about the travel conditions on my trip, but this bus trip was pretty high up on being the longest and pretty uncomfortable! The buses in Chile were surprisingly good, however being in a reclining seat for 17 hours is never going to be fun! I also had sadly started having a few problems with my back which wasn’t helping. Anyway it was a cheap and easy way to get from A to B (far cheaper than flying, which is much more expensive internally in South America than in South East Asia).

The Atacama Desert is the driest non-polar desert in the world covering 1,000 km of land. San Pedro is a really cool ‘desert’ town from which you can visit loads of amazing places in the Atacama Desert. I did a number of day trips from here, such as El Tatio which is a geyser field located in the Andes Mountains and 4,320 meters above sea level. This place was out of this world and it felt like being on another planet. It is the third largest geyser field in the world, so pretty spectacular.

I also did a sunset trip to El Valle de la Luna (or Valley of the Moon) which is located 13 km west of San Pedro, the place looks like the surface of the moon with beautiful colours and textures. The colours at sunset were amazing and we could just sit and watch it setting over this beautiful landscape. I also did a star gazing tour in San Pedro as the desert has some of the clearest skies in the world and I managed to visit some hot springs as well. Really amazing place to visit and unlike anywhere I had been before! I ended up spending 5 nights here before making my way overland to Peru, I had been experiencing some bad back pains so decided to continue up to Peru rather than doing the usual 3 day (bumpy) overland trip to Bolivia which most backpackers I met were doing.

Sunset at Valley of the Moon.

Read about my next stop in Peru…

One thought on “Next stop South America, first stop Chile.”