I travelled to Laos overland in September across the Northern Thailand border at Huay Xia via night bus which took me around 14 hours (some of which included some hair-raising/stomach churning driving through windy small roads!).

I really didn’t know what to expect from Laos and having only been travelling for 2 weeks when I entered the country, I was feeling nervous and apprehensive! However this quickly changed once I arrived in Luang Prabang, a beautiful city in the North central of Laos which has the Mekong River meandering through it. Parts of the city actually hold UNESCO World Heritage status, due to the beautiful architecture and the good condition of the city. I was amazed at how stunning the city was and could have stayed here for weeks exploring, eating and watching sunsets over the Mekong River.

My highlights of Luang Prabang included the Kuang Si Falls, the night market, tasting the French patisseries at some of the local cafes, visiting Mount Phousi at sunset and wandering round the beautiful Buddhist temples.

I ended up arriving into Luang Prabang at 3am in the morning when I first arrived, which wasn’t ideal, but meant I managed to catch the early morning Alms Giving Ceremony with the local monks. This is a tradition in which the monks come round the city at sunrise and locals give them their offerings (usually food) to take away with them. Tourists are welcomed to also take part in this ceremony, it was very beautiful and peaceful to watch especially that early in the morning. 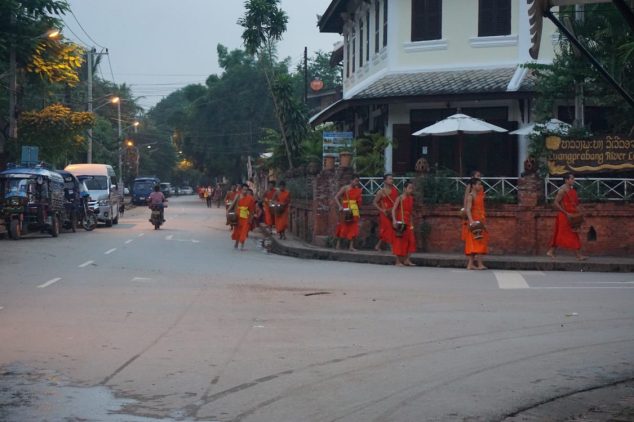 Alms Giving Ceremony at 5am in Luang Prabang, Laos.

I ended up spending two and a half weeks in Laos, it was not long enough and I missed out a lot! However here are just a few of my highlights.

END_OF_DOCUMENT_TOKEN_TO_BE_REPLACED

On the 1st September 2016 I left my family and friends to travel around the world on a ticket with the aim of travelling for one year. This blog aims to sum up a few of my adventures along the way and maybe even give some useful tips to those wanting to travel more.

My first stop was Bangkok, the city that has everything. I have been once before but for me it is summed up by the smiling faces, Tuk Tuks and a place you really can get anything! There is also the smells (which can unfortunately not always be good ones) but mostly it is from the Thai spices and cooking from the tasty street vendors, food markets and array of cafes and restaurants on every corner. There are temples sprawled across the city, floating markets, riverboats and off course the infamous Koh San Road (a backpackers dream!).