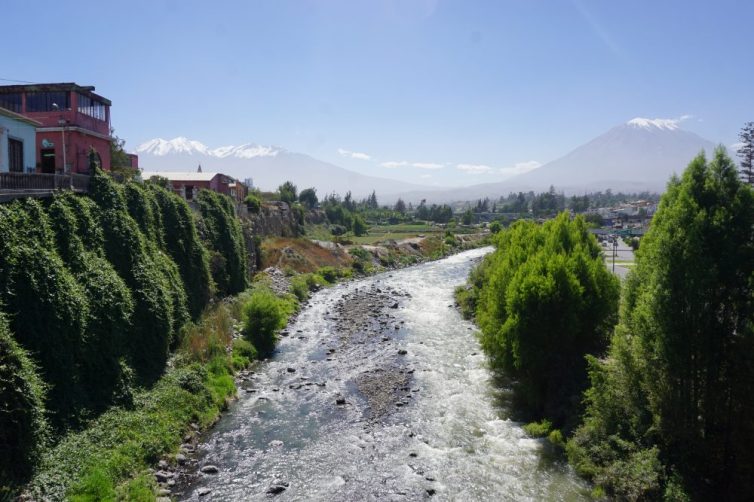 Views of the surrounding volcanoes in Arequipa, Peru.

I arrived into Peru at the beginning of May overland via two buses and a ‘collectivo’ (taxi)  from San Pedro, Chile arriving into the city Arequipa. I was a bit worried about this journey, I think because it would take so long (almost 24 hours) and also being on my own with no spanish was proving a little harder than I thought. I took an overnight bus from San Pedro to Arica (just on the Chilean border) which took about 19 hours, then from Arica I took a ‘collectivo’ or taxi across the border into Tacna in Peru. 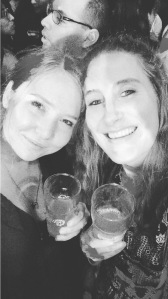 Julie and me at the Beer Festival.

Luckily I had met two lovely American girls on the night bus from San Pedro, who also spoke some spanish, so we did the crossing into Peru together, it took about 45 minutes to cross the border by effectively paying a ‘collectivo’ to take us across the border. One of the American girls had lost an entry form you get when going into Chile which you need to leave the country and the passport control guy took great delight in pretending he wouldn’t let her into Peru, apart from this is was all pretty easy. From Tacna we then all took another 8 or so hour bus to Arequipa, the second largest city in Peru, this journey was beautiful arriving into Peru and seeing some spectacular mountainous terrain and the andean mountains. 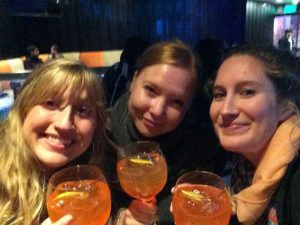 I sadly was still having a few issues with my back which had started in Chile. At the time I put it down to doing so many uncomfortable night buses, lugging around my backpack and generally jumping around countries! So due to this I ended up spending nearly 2 weeks in Arequipa, which is a beautiful city to just chill out in, I took some spanish lessons and met some lovely friends to hang out with in cafes and restaurants! I even ended up at a beer festival one weekend, which felt a bit like being in London and also managed to see a ‘famous’ Peruvian rock band one night.

The historical center of Arequipa is a UNESCO World Heritage site, it really is a charming city with beautiful white washed buildings similar to European styles. I did a great walking tour here which took us to some beautiful spots in the city. 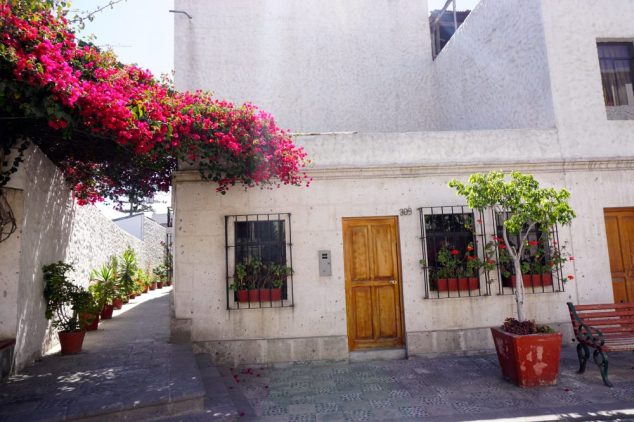 There are lovely views of three volcanoes around the city as well making for some stunning scenery. I also visited the amazing ‘Mummy Juanita’ in Museo Santuarios Andinos. She is a well preserved frozen Inca girl who was killed as an offering to the Inca Gods between 1450 and 1480. She was found on Mount Ampato part of the Andes Cordillera in southern Peru. Pretty amazing (and kind of spooky) to see, as her body is very well preserved.

I ended up spending a month in Peru, it was finally time for me to ‘slow’ down my travels a bit! I feel like I left out a lot in Peru, but at the same time my travelling needed to slow down a bit, I had been moving around on average every 3 days in the last 7 months, so it was not surprising I was craving sometime in one place! For the first time in a while, I decided to get a nice hotel in Arequipa and treat myself to my own room and bathroom (it was heaven!!) and looking back on it now, the hotel cost about £15 a night which doesn’t seem so much now. 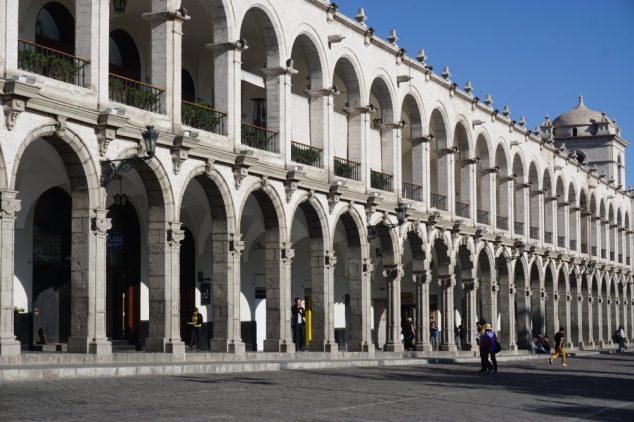 Here are the rest of my Peru highlights –