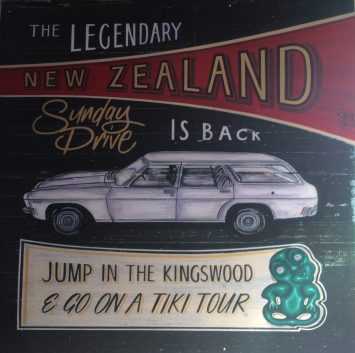 I spent two months travelling around New Zealand’s north and south island. Someone told me before I arrived that every corner you turn in New Zealand you say ‘WOW’ and it was so true! I landed in Auckland at the beginning of February and even though it was going into Autumn, I was lucky enough to have spectacular weather in my time visiting this beautiful country.

I am lucky enough to have friends and family on the North Island, so I stayed with them when I first arrived, which was so lovely and made me feel at home immediately. Although I was suffering a little bit from culture shock after spending 5 months in Southeast Asia, it was made easier by seeing some friends and familiar faces.

As there is so much to mention in regards to New Zealand, I am going to do two blog posts, the first one on the North Island and the second on the South Island. So here are my highlights of the North Island where I spent just under a month.

The Bay of Islands –

‘Hongi’ is the a traditional Māori greeting in New Zealand.

The Bay of Islands is located in the far north- east of the North Island, there are 144 Islands in this bay with Urupukapuka Island being the largest. I stayed in Paihia and from here explored the area and visited Urupukapuka Island. This is also a very historically important place to the indigenous Māori people, who are the indigenous Polynesian people of New Zealand. Arriving into New Zealand around the 13th century on canoes, one of the largest migration of Māori canoes arrived into the Bay of Islands.

This area is also where the first European settlers settled and where the famous Treaty of Waitangi was signed between the Māori and the European settlers. So it felt like a very important place to visit both historically and culturally to learn a bit more about the history and heritage of this country. 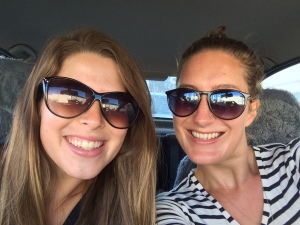 Joce and me road tripping!

I visited the Waitangi Treaty grounds which you can walk to from the town of Paihia. I really enjoyed visiting these grounds and finding out more about the history of New Zealand and also about the traditions of the Māori people. I was able to witness a cultural performance of a ceremonial greeting (also known as Hongi) between the Maori’s and us as visitors to these important grounds.

I also met my lovely Canadian friend in Paihia and we spent the day on Urupukapuka Island, which was a 45 minute boat ride from Paihia. This island was absolutely stunning, we spent the day having lunch here, exploring the island and sunbathing and swimming in the beautifully clear (but cold) waters!

Views from Urupukapuka Island, The Bay of Islands.

Me and Henrike tramping in the Tongaririo National Park.

The Tongariro Alpine Crossing is one of New Zealand’s most popular tramping tracks in the Tongariro National Park. I completed this with a travel buddy and it took us about 8 hours (we took a lot of photographs though!). The full distance of the hike is around 19.4 km, so it certainly wasn’t a stroll in the park. It was spectacular though, mainly due to the amazing terrain of volcanoes, the main one being Mount Ngaurugoe (made famous as ‘Mount Doom’ in the Lord of the Rings films). There are also the famous Emerald Lakes to see which add to the beauty, the terrain can be rough and steep descents make it tiring, but was such a beautiful place. 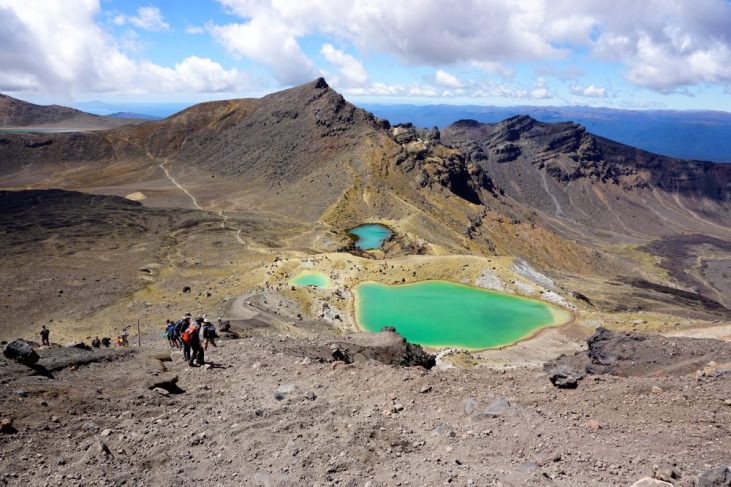 Emerald lakes of the Tongariro Crossing.

The Tongariro National Park and Mt Ngauruhoe (aka Mount Doom).

Auckland and the West Coast –

I stayed in Auckland for quite a while with family friends which was lovely and made me feel very at home. There are so many good coffee spots and brunch spots in Auckland it was hard to chose which one to go to.

Aside from the city (and coffee) you can visit so many spectacular places around Auckland, one of my highlights was visiting Piha located on the West Coast, about a 45 minute drive from Auckland. It’s a good surfing beach and was lovely to visit, it’s quite a moody place, very windswept and rugged. It is also quite cut of from the outside world, as getting to it was down a very winding small road!

Me on Piha Beach, West Coast of Auckland.